Neuropsychologist Justin Feinstein has discovered that “something special appears to happen in brain while the body floats.” Dr. Feinstein believes so deeply in the therapeutic potential of floating that he built his whole career, and laboratory, around trying to prove it. He opened the Float Clinic and Research Center at the Laureate Institute for Brain Research in Tulsa, Oklahoma.
Dr. Feinstein has faith that floating could be an easier way for many people to enter into a meditative state. He reported to TIME Magazine that: “Floating has given me hope that a whole chunk of our population that normally would never be able to meditate could now achieve those sorts of deep meditative states.”

The preliminary data of the research are showing that floating brings down anxiety in the brain. What Feinstein has found is that the amygdala is shutting off after floating! Its amazing to know that this can be done without using medication.

Other studies have shown that floating reduces the levels of cortisol in the blood which is a high stress-signaling hormone. Another study, published in 2006 in the International Journal of Stress Management, has found that people with stress-related pain, after 12 float sessions, reported reduced pain, stress, anxiety, and depression while improving sleep and optimism. These favourable effects lasted for four months after ending treatment! This is exciting news especially since Research by the National Institute of Health has claimed that emotional stress is a major contributing factor to the six leading causes of death in the United States: cancer, coronary hearth disease, accidental injuries, respiratory disorders, cirrhosis of the liver and suicide.”

Although meditation can be highly effective for reducing stress, it can also be very difficult to attain a relaxed state of mind after a stressful busy day at work. As our stress levels increase our senses become more easily irritated and focusing becomes more difficult. If you are experiencing such difficulties when trying to meditate you should definitely consider meditating while floating in a sensory deprivation tank. There are many cases where individuals, who were unable to relax their mind and meditate, have reported that the first time they were able to completely relax their mind and let go from all thoughts was during floating.

Justin Feinstein is the head of the Float Clinic and Research Center, a dedicated float research facility housed in the Laureate Institute for Brain Research. Justin introduces the work they’ve been doing and sets the ground for the data he and his colleagues presented at the 2015 Float Conference. 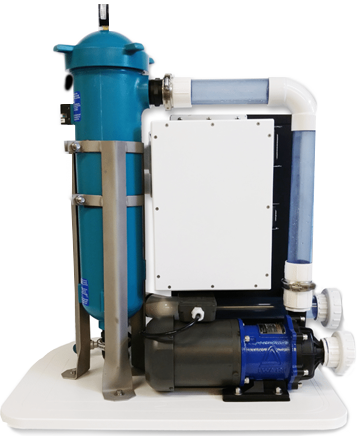 How do you clean the tanks?

The water is fully filtered 4 times between each float, passing through a 1 micron filter and treated with dual stage Ozone H2O2 and UV light treatment.

The Evolution Filtration System is able to filter particles from the water to 1 micron in size and is FDA compliant for drinking water (Class 1 Filtration). Standard competitor float pod and spa filter cartridges only filter to 20-30 microns and require constant manual cleaning.